One of the most frequent questions we receive at Apex Window Films is if it is possible to create various mirror effects with window films.  The short answer is... Yes!  There are several reflective or mirror effects that may be achieved utilizing window films. 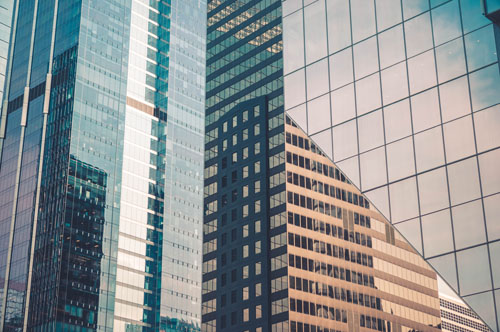 Highly reflective solar control films can create a mirror effect on exterior windows, such as those seen on office buildings. These films are typically highly reflective silvers but other colours are available. The films provide what we call "Daylight Privacy" which means that you cannot see through them as long as the light outside is brighter than inside. 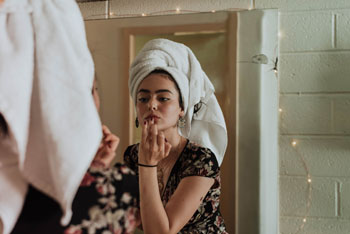 Are you considering replacing existing glass with a mirror?

Apex Window Films can help you transform your ordinary glass into a one-sided mirror, using a combination of silver and black window films.

To convert regular interior glass to a mirror, you will require two layers of film. We recommend our most reflective window film, Apex Supreme Silver 20 (see below) for this application. Below this reflective layer, or on the opposite side of the glass, apply Apex Black-Out Window Film (see below). It is important to note that you will not be able to see through this mirror from either side of the glass. This effect should not be used on exterior glass as the absorptive nature of the black-out film could cause glass stress and fracturing.

Click Here for DIY Info and Films for Creating your own Mirror!

One-way mirrors, also known as two-way mirrors, are often associated with observation rooms and security applications, where viewers on one side of the glass may look through the window without being seen on the other side. These types of glass mirror effects are commonly seen on television and in the movies.

Clients seeking one way-mirror effect should be aware that light conditions are an important factor in achieving this result. The 'observer' side of the glass must be darker than the side of the glass that is being observed, otherwise you will be able to see back in. Think about mirrored glass buildings. In the daytime you can't see in only exterior reflections are visible. However, at night when interior lights are on you can see right in.

For optimum results, the side of the glass which you want to be able to see should be very brightly lit, while the 'hidden' side of the room is completely dark. Adding darkening layers of film can enhance the effect, allowing a certain amount of diffuse lighting on the observation side. It should be noted, there is no such thing as a true one-way mirror--it defies the laws of physics! Apex Window Films can work with you to achieve the best mirror effect for your specific application using our wide range of quality window film products.

And, remote controls work through the glass

Have the feeling you are being watched? Try this:

If you can access the adjoining room, simply turn on the lights--the mirror becomes a window.

If not, shine a flashlight through the mirror and look closely to see if you are able to illuminate objects on the other side!